The screech of tyres, the smell of burning rubber, and the sight of the world’s best indoor racing drivers battling for international glory.  These sensations may seem a world away from the business of international expansion, but are still familiar for Briars Group.  You may or may not be aware that we have sponsored a Briars Racing Team for the past 7 years to compete in international karting events.

‘The KWC Championship is the highest level of indoor karting racing. With strong competitors from all around the world, the championship is always a closely fought encounter.’

The Briars Racing team has both history and pedigree.  Sean Brierley is our primary driver and has occasionally been joined by his brother Liam.  In 2015 we sponsored a team of 6 British drivers. 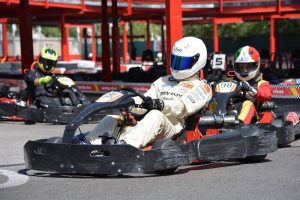 The flagship event each year is the Kart World Championship  which comprises a team event, the ‘Nations Cup’, and an individual championship, typically representing 16 nations.  The KWC Championship is the highest level of indoor karting racing. With strong competitors from all around the world, the championship is always a closely fought encounter.

It is a tough encounter too.  The championship organisers are keen to keep every driver on his or her toes: ‘We strongly believe a true champion can race any kart on any surface. That’s why KWC is not tied to one karting location or one brand of karts. Every year we try to find new challenges’.

But challenges are laid down in order to be overcome.  In 2017 KWC was held in Madrid where the Nations Cup was taken home by the British team of Sean Brierley, Sam Spinnael, and Giovanni Baccellieri, who became joint world champions!

This year the KWC was held at the Victory Lane circuit in Charlotte, North Carolina USA.  With over 20 corners and its long race distance, this track is a challenge for even the most experienced of drivers.  The corners have changing levels of grip and many are slippery.  Add into this mix the conditions (35 degrees with very high humidity) and the event becomes even more demanding – one driver recorded a weight loss of 4kg during this year’s race.

Sean Brierley and his KWC 2019 medals

We are very pleased to report that Sean has just returned from this venue with a haul of seven medals. These were awarded for podium positions in the heats, semi-finals and Grand Final, where he finished a very creditable 13th out of 100 world-class drivers.

We offer our congratulations to Sean and wish him and the Briars Racing Team every success in future events.