This Summer, Kate Jolly jumped out of a perfectly good aeroplane.  The CEO of Briars Group had not taken leave of her senses, though.  In fact, there were two very good reasons for this act.  Firstly, to raise money for the Guild of Entrepreneurs Trust  – a charity which is dedicated to supporting the development of entrepreneurs and bringing the opportunities of entrepreneurship to young people.  Secondly, Kate was jumping in memory of her late father, “the only member of the family that I know to have donned a parachute in earnest”.

Both a good cause and a personal journey, the story of the day is best told through Kate’s own words:

“I had become steadily more concerned about how chilled I was – expecting panic to sneak up on me – strangely, it never did, although I did experience a few curved balls during the adventure! 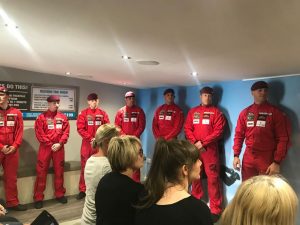 Most of you may know but, The Red Devils are the British Army’s Parachute Regiment’s display team.  The Devils wear the distinctive maroon beret and are comprised of regular serving paratroopers from the four battalions of the Parachute Regiment who volunteer to serve on the display team.  Their professionalism is plain to see – as is their spark for life and their sense of humour when faced with civilians who are clearly much more comfortable behind a desk or sat with a glass of red wine…

Arriving at 0800 on a hot and gloriously sunny day, we began our briefing and training followed by a hearty breakfast.  It would be a long day with the last of our team diving at 1800 hours…

We were split up according to combined weight load for the plane and turnaround time between each group was fast, organised and eerily calm. When the time arrived to head off, we each donned the distinctive Red Devils’ colours, topped off by the most becoming (not!) of hats.  Once on board, the plane climbed rapidly to 15,000 feet and the doors opened.  For some reason, I drew the short straw and found myself jumping first – thanks to a few friends?

Sat on the edge of the door – legs outside the plane, crossed at the ankles and looking down at the clouds below us, I lost all sense of time until we rolled out and the fun began.  I immediately became aware that I was upside down contemplating the undercarriage of the plane, whilst beneath me a sea of white clouds around me splendid sunshine.  Righting the body to be the sensible way up! the world around me came in to glorious technicolour.  All that was missing?  My airplane seat and a gin & tonic!!

The first curved ball  – the impact of travelling at 125mph in a vertical direction on a windy day with no face mask.  As the cheery photographer happily snapped away I contemplated his reaction had he heard me uttering “I can’t breathe – this isn’t what I had planned!!”  The Scottish upbringing kicked in as I heard my late father tell me to get my act together and I settled in for the fun of the drop.  From there on it the experience was something that I will treasure for a very long time. Dropping through the clouds in a blanket of silence and stillness has a soporific effect on the mind further enhanced when the cloud cleared and you could see far and wide, enjoying the silence of the parachute as it turned here and there as you espied far-reaching views below.

As we approached the landing site I was conscious of my inability during training to lift legs sufficiently for the landing. This did lead to a brief interlude during which I counted on 4 crew all shouting at me at the same time.  It clearly had the desired effect and perhaps there is a rationale for why British NCOs shout so loudly!  Either way, I landed without injury and first question on the ground was “can I go again?”

A few months ago, had I known this jump was to happen I would have run the other direction.  As you know, I decided to honour a great man and a good charity at the same time.  I wish he had been there to see it – although he would have lectured me on the landing! There were others jumping on the day and folks elsewhere who stepped out of their comfort zone for a variety of reasons to support good causes.  I admire them all.   It doesn’t matter how safe or extreme that step is – it’s about pushing ourselves sufficiently to show we care through our deeds and actions.  If we are lucky we raise monies along the way.  If we are very lucky we also learn more about ourselves and that is a great gift.  Oh would some Power the gift give us, to see ourselves as others see us.”

It is still possible to donate to help the Trust’s work in supporting current and future generations of entrepreneurs, discover more about their projects.  Most people in the UK are employed in businesses with less than 50 staff and the founders need as much support as we can muster to help them succeed.  Take a look at Kate’s donation page or, if you prefer, please contact us and Kate can put you in direct touch with the charity.

Thank you for your support.