Briars Group recognised as Founder Supporter of The Company of Entrepreneurs

Briars’ Chairman Andrew Brierley and CEO Kate Jolly were both part of the group led by the late Dan Doherty and Sir Paul Judge who established the Guild of Entrepreneurs in 2014.  The Briars Group was among the Guild’s original sponsors.  This sponsorship enabled the Guild to carry out its work supporting organisations, charities and academic institutions that work with budding entrepreneurs, especially those within underserved communities.

The Guild has since gone from strength to strength and in 2020 became a Company Without Livery.  It is on course to be granted full Livery status and take up its full position in the City of London.  In recognition for the support provided over this period, Master Entrepreneur Lars Andersen presented The Briars Group with a commemorative plaque.

As the Company has grown it has been able to expand its activities.  The Education Committee delivers a wide range of programmes promoting entrepreneurial thinking in secondary schools and universities whilst the Outreach Committee supports grassroots entrepreneurial schemes.  The Company also organises charitable and prize-giving activities.

The latest way in which the Company is providing support to new businesses is through the Entrepreneurs’ Award in Social Innovation (EASI) which seeks to reward innovative social or environmental products or services for the benefit of a community, or wider society.  Early-Stage UK businesses are invited to apply for a grant of £10,000 and a significant package of support from the collective talents and experience of the Company’s Freemen.

Businesses and organisations with a social conscience are more than welcome to join Briars in supporting the Company through sponsorship, donations, gifting products or services, or fundraising.  The Company also welcomes applications from men and women who have invested their own money and time in setting up and then running successful businesses. 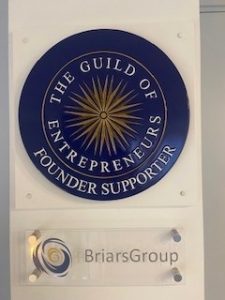